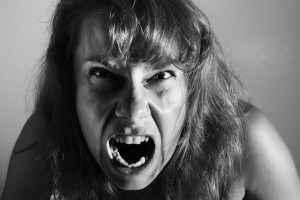 People commonly undergo an array of feelings throughout the course of each day, and for most people they should be able to control their feelings and keep things at bay. However, for some people, controlling their wrath can be quite difficult, causing great difficulties in their life for themselves and people close to them. Anxiety, stress and in some cases depression are recognised to be linked with uncontrolled temper but there are effective ways of dealing with them.

When a person gets angry, they will normally find their pulse rate increases along with blood pressure levels as chemicals in the bloodstream such as adrenalin are pumped around the body.

These circumstances could make it progressively hard to manage day to day life and for a lot of people they may suffer problems within their relationships, family, friends and also their job.

Rage can be shown in numerous forms, from social problems and general aggravation to violent outbursts over minor circumstances, such as ‘road rage’ when steering. Long term unresolved anger can create a downward spiral leading to mental health problems such as depression, as well as health concerns such as high blood pressure.

The causes of anger problems vary significantly from person to person. General triggers include bereavement, abuse or frustration as well as feelings of lack of control, inadequacy, or fear. Hypnosis can treat all of the issues that surround anger management quickly and efficiently.

Utilising hypnotherapy, the primary triggers and beliefs maintaining the rage can be addressed, and new, more relaxed responses can be put together by the subconscious. In addition, the process of hypnosis is naturally relaxing, which can help to reduce the adrenaline levels, allowing the customer to cope better with previously stressful situations.

The techniques used in hypnotherapy treatments help to alter the responses to certain circumstances, so as to prevent reactions of anger recurring. So the person feels calmer and more relaxed than they would have previously.

And just as removing fuel from a fire stops it spreading; simply by helping the person to tackle the underlying factors that cause rage can lead to a dramatic enhancement in their social and work life.

Sally Moore, a competent hypnotherapist, who works at Hypnotherapy Lincolnshire, based in Woodhall Spa and Lincoln, Lincolnshire as successfully helped numerous clients to eliminate their anger. For a free, no obligation, consultation please contact Sally on: 01526 351153.